The Department of Chemistry and Biochemistry has a vibrant and diverse named seminar series that honors two important figures in the history of the Department. 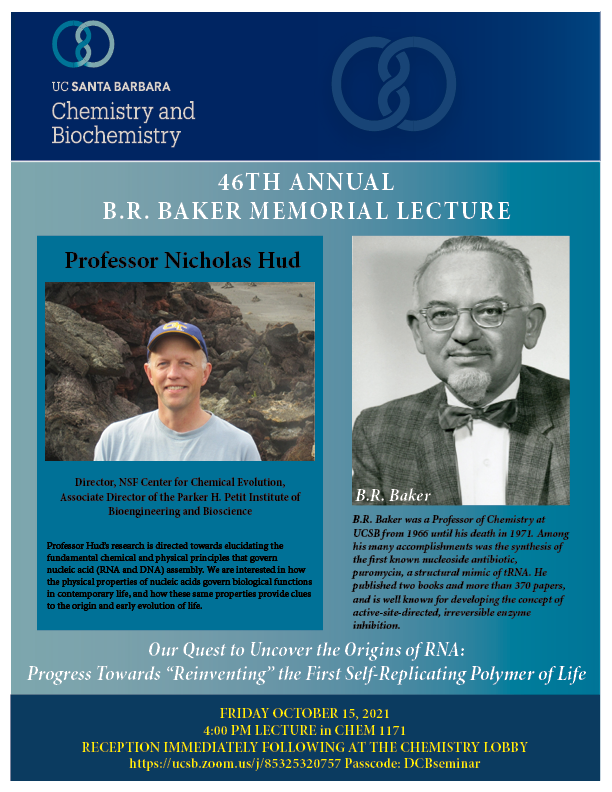 Professor B.R. Baker was a Professor of Chemistry at UCSB from 1966 until his death in 1971. Baker's graduate work on the structural elucidation and synthesis of Cannabis constituents marked the beginning of a prolific career in the chemistry of natural products. He undertook many diverse projects of medicinal interest including the synthesis of antihemorrhagic vitamin K analogues, biotin derivatives, compounds with hormone activity, sulfones with activity against tuberculosis, and alkaloids. He published two books and more than 370 papers that included a series of papers on the structure and synthesis of the antimalarial alkaloid from Hydrangea that filled an entire issue of the Journal of Organic Chemistry in 1952. He determined the structure of the first known nucleoside antibiotic, puromycin, and synthesized it in 1955. This achievement came long before the discovery of the structure of transfer ribonucleic acid (tRNA). Puromycin was later shown to mimic the structure of tRNA and became and an important tool of research in molecular biology. Puromycin was too toxic for cancer chemotherapy, but it aroused Bill's interest in this field. Few of the myriad of compounds that he had so meticulously synthesized showed any antitumor activity in vivo, so he sought a more rational approach to cancer chemotherapy. Perhaps his greatest contribution to medicinal chemistry was the concept of active-site-directed irreversible enzyme inhibition of substrate-identical enzymes. A monograph summarizing this approach to drug design promptly became one of the classic works in the field.

Bill's two great interests in life were his family and chemistry. He married Reba Brodsky in 1937 when he was a graduate student, and they were inseparable until the end. Their temperaments were strikingly similar; they were always cheerful, unpretentious, optimistic, and sanguine of outlook. Together with their three daughters, the Bakers were a tightly knit group whose pleasure in family life was communicated to their many friends.

Since founding the B.R. Baker Memorial Lecture and Student Fellowship in 1975, the memory of B.R. Baker has been actively kept alive by his devoted wife, Reba Baker.  On the evening of February 23, 2013, Reba Baker passed quietly in her sleep at age 95. Mother of Shari, Bonnie and Reenie, grandmother of Jeanne and Debbie, great grandmother of Win and Holt, and surrogate mother to thousands of foreign students whom she taught at UCSB from 1975 until her recent illness, her most precious connection was as wife and partner to her husband, Professor B.R. Baker.
The B.R. Baker Memorial Fellowship in Chemistry is awarded to a graduate student on the verge of graduation who has given strong indication that they will make continued and substantial contributions to the progress of organic, medicinal, or biological chemistry. Fellowship candidates are nominated by department faculty members and recipients are selected by a Department Faculty Awards Committee. Each fellow is honored at the annual B. R. Baker Memorial Lecture, and recipients receive a cash award of $500.
Past lecturers:

William E. Palke, professor in the UCSB Chemistry Department for 31 years, died on May 10, 1999 from a heart attack. He was 58 years old. To many, he was more than a professor. He was a scientist, colleague, hiking companion, rock climber, and friend.
Professor Palke did his graduate work with W.N. Lipscomb at Harvard, receiving his Ph.D. in 1966. There followed two years of postdoctoral work as an A.A. Noyes Fellow at Caltech where he worked in collaboration with Professor William Goddard. Then in 1968, he came to UCSB as an assistant professor in theoretical chemistry.
His first scientific publication came in 1962 from undergraduate work done with Professor Fred Anson at Caltech. Some 37 years and 84 papers later, his most recent paper appeared in the Journal of Magnetic Resonance.
Professor Palke was a great collaborator. In our department he was a major resource for many graduate students and co-authored papers with 10 different faculty members.
By and large, the work of Professor Palke fell in five areas. He developed efficient computational methods for determining wave functions used in evaluating properties of molecules. He sought to understand the quantum details of chemical bonding. He analyzed the different factors that give rise to the barriers to internal rotation in molecules. He applied density functional theory to relate the electron density in molecules to molecular properties.
In recent years, he extended the theory of relaxation effects in nuclear magnetic resonance experiments. This work resulted in a set of computer programs that, for the first time, permitted calculation of the spectra exhibited by complicated spin systems interacting in general ways.
Down through the years Professor Palke taught a variety of courses including General Chemistry, Environmental Chemistry, Physical Chemistry, Statistical Mechanics and Quantum Chemistry. He was widely regarded as one of the best teachers in the department. He is sorely missed.
Past lecturers:

The CSSS is a forum for graduate students in the DCB, created and managed by graduate students, to share their work and research with each other as well as any and all members of the campus community.  One quarter per year, approximately 16, 20-minute general audience talks (2 per week, during the noon hour) are presented by advanced (3rd-5th year) graduate students.  During the spring, the Department presents the Best Scientific Presentation Award to the speaker who best communicated their scientific research, as determined by a vote of other graduate students and audience members.  The award recipient will also be asked to give an encore presentation in the presence of alumni, faculty, and other invited guests.  All DCB graduate students are invited and encouraged to participate in the planning and organization of the CSSS.  Opportunities for involvement include seminar and room scheduling, fundraising and networking, recruitment of qualified speakers, event-day set-up event-day master of ceremony (MC) responsibilities, and other responsibilities as dictated by the future development of the program.  Contact the CSSS Executive Committee for more information or to get involved.